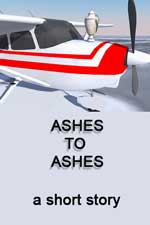 He walked into the flight office carrying a small cardboard box under one arm. “Your sign says, ‘Air Charter.’ I’d like to have someone take me up.”

“I can help you,” I said, as I sized up the thirty-something, slender guy in a sports shirt and khaki pants. “Where do you want to go?”

“Do you know where the Hogsback is?”

“The Hogsback? Do you mean the ridge that runs up Mt. Helena?”

“Yeah, that’s it. I need someone to fly me over the Hogsback.”

“I can do that. Are you gonna take pictures or something?” The request was a little unusual. Sometimes realtors would want to take aerial pictures of a neighborhood, or people wanted a sightseeing tour but this guy had a specific destination in mind up on the mountain that overlooked the city.

My new customer shifted the small cardboard box to his other arm. “I need to drop something.”

“Well, not exactly.” He placed the box on the counter. “This is my Uncle Joe’s ashes. He loved hiking up there. Before he passed away he requested his ashes be sprinkled over the area. I want to honor that request. I figured the easiest way was to drop them from an airplane.”

I heard of others doing that, although never experienced it myself. But, hey, it was business, and I could use the work. How hard could it be, fly over the mountain—open the window—dump out the ashes.

“We can do that,” I answered with confidence. “When do you want to go up?”

“Let me check the schedule.” I scanned my desk-pad calendar with all its notes, circles, and doodles. I knew I was open, but I wanted to make a good impression. “Looks like we have a Cessna 172 available, and I have some time.”

We walked out to the Cessna, and I loosened the tie-down ropes.

“You can hop in on the right side while I do the preflight,” I directed.

He slid into the seat, strapped on the seatbelt, and sat the box on his lap.

After completing my check of the airplane, I stopped at his door. “This window swings open like this.” I twisted the latch and pushed the window out. “I have to slow the airplane way down, so don’t open the window until I tell you to.”

We taxied out, took-off and climbed into the valley. My passenger sat quietly looking out the window as we gained altitude. Soon he turned and asked, “shouldn’t we be going the other way?”

“I have to gain three-thousand feet to safely cross the mountain ridge. I’m just circling as we climb.”

“Oh.” He turned back and watched the town slowly shrink below.

As we circled, Mt. Helena rotated into view showing the long ridge that ran from its peak to the south topped by a favorite hiking trail for locals and visitors alike. Green forest blanketed the side of the mountain overlooking the legendary gold-strike town of Helena, now Montana’s capital.

I turned the airplane to line up parallel with the ridge, pulled back the power, and dropped the flaps. My passenger had opened his cardboard box and extracted a stainless steel urn that I assumed contained Uncle Joe’s ashes.

Once the plane was slow enough, I instructed, “you can open your window now.”

The young man twisted the latch and pushed open the window. Seventy miles-per-hour wind overpowered the growl of the engine. He lifted the lid from the urn and tipped the container up to the window and over.

I believe it was at that moment that Uncle Joe had a change of heart and decided he didn’t really want to fall the five-hundred feet to the forest trail below. In fact, he decided not to leave the airplane at all and made an abrupt one-eighty to join us back in the cockpit. My stunned passenger dropped the urn to the floor, grabbed the window, and slammed it shut, but it was too late. We became intimately acquainted with Uncle Joe as his ashes swirled around, coating us with a light grey powder from head to foot. I sputtered and sneezed as Uncle Joe invaded my eyes, ears, nose, and mouth.

At times like this, one really wonders about the wisdom of making uninformed decisions.

I looked over at my client, his eyes the size of saucers, he swatted at ash like it was a swarm of bees.

Moments later, as the ash settled, we sat motionless in the realization of what had just happened. Uncle Joe now coated the inside of my airplane instead of his final resting place among the serene pines below.

I heard myself leak my thought out loud, “I hope he likes to travel.”

Uncle Joe’s nephew turned toward me, and our eyes met. His face was blank and white with ash. I held my breath, not knowing what else to say. We stared for a moment, and then he burst out in a huge guffaw.

Wiping his face, he roared over the engine, “leave it to Uncle Joe to get the last laugh.”

Man, was I relieved to hear that.

We flew back to the airport and taxied up to the maintenance hangar. Luckily, no one was around. I wheeled the shop-vac up to the plane to rescue Uncle Joe from the indecency of his predicament.

“Should I put a new bag in the vacuum, first?” I asked. After all, that was the least I could do. It seemed sacrilegious to suck him in to spend eternity with all the dirt and grime from the hangar floor.

“Not a bad idea,” my client said with a smile.

We took turns relieving Uncle Joe from our clothes and then from the cockpit of the airplane. A few candy wrappers, dead flies, and cashew shells joined him in the bag.

When we had reached all the corners and crevasses possible, I pulled the bag from the shop-vac and handed it to his nephew. “I think we got most of him.”

“Thanks,” he said. “I’m gonna hike up the Hogsback tomorrow and empty it. No use telling the family what happened.”

I heartedly agreed and sent my not-so-satisfied client on his way—no charge, thank you.

After that, every time I flew that old Cessna, I swear I could hear muffled laughter under the sound of the engine . . . “Uncle Joe?” 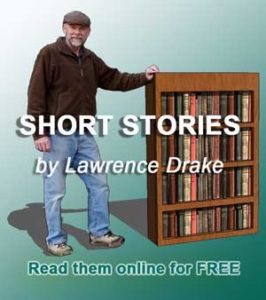