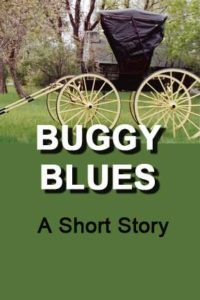 He could have raised his bid and won the clean little horse-drawn doctor’s buggy at Ray’s Auction Barn, but Vernon let it pass—just a bit too expensive. A year ago, he came up with the notion to join the 1982 Centennial Wagon Train reenactment from Fort Smith to Billings, Montana. That instigated a search for a rig and a horse to pull it. He came up empty-handed until he and his wife made a trip to visit his daughter in Indiana.

Being involved in the farming community, his son-in-law took Vernon and Bettie to a farm sale where there happened to be the prettiest little black buggy with a fold down canvas top and large yellow wheels—and going for bottom dollar.

“Really?” Bettie said in disbelief. “Aren’t you getting the cart before the horse?”

“How are you going to pay for it—use my new carpet money?”

Vernon didn’t listen. He was too focused on the prize.

“How are you going to get it home? In our airline luggage?”

A few phone calls eliminated crating, and shipping as too expensive—the same for renting a U-Haul truck.

“I’ve got a utility trailer you can have,” Vernon’s son-in-law offered.

Vernon quipped. “I’ll buy a pickup, load the buggy on the trailer, and we’ll tow it home.”

Bettie could see he set his mind, so off they went to the farm and wrote the check for $950. Vernon became the proud owner of a vintage doctor’s buggy, complete with harness and tack. Now he needed a pickup to pull his prize home and a horse to pull it when he got there.

A bit of shopping around produced a nice 1972 El Camino for $6,000, plus hitch, plus tarp, plus license and insurance. Not a real pickup, Chevrolet made a two-door station wagon into a sporty utility vehicle with a built-in cargo bed.

“Not to worry, Bettie, I’ll sell it when we get home and make a couple hundred in profit.”

“Should our new carpet be off-white or rust,” she asked.

Vernon got off the phone after talking to the airline. “Ah, well, no refund on our return airline tickets. There goes the profit on the pickup.”

With the buggy in tow, the couple headed out for the long trip to Montana. All too soon it became obvious that towing proved to be a big job for the little pickup. At ten miles per gallon and three stops for repairs to get it to run right, the expenses piled up. By the time they got to South Dakota, snow flew over the windshield. Passing through Sturgis, ice on a bridge sent them into the guardrail, wiping out the side of the El Camino and throwing a scare into the couple. After assessing the damage, Vernon pronounced the pickup still drivable. Shaky from their ordeal, they safely made the rest of the way home, albeit with a slightly less attractive vehicle.

The repair cost of the bridge encounter came to $1,400. Then there was the valve job on the engine. The El Camino remained in the shop with no idea of what that bill would be. The bargain-priced buggy lost its luster long ago. Bettie got her $2,200 off-white carpet, but the faded sofa looked out of place, so a thousand dollars upholstery job fixed that. Unfortunately, the wallpaper no longer matched the sofa and needed to be extended into the dining room.

In exchange for a birthday gift of a two-wheel driving harness from Bettie and daughters, Vernon felt obliged to agree to new drapes, curtains, two occasional chairs, and coffee table, with a new bedroom set thrown in for good measure.

A buggy is no good without a horse to pull it. Undaunted, Vernon found a beautiful Tennessee Walker mare named Donna-Far-Go. For $2,000, plus the cost of new horseshoes, he obtained the other half of his buggy combo. Never mind that Donn-Far-Go had never been in harness, let alone pulled anything.

After six short weeks of training with the driving harness, Vernon got the horse to go in the general direction he wanted when commanded, although she didn’t like the idea of stopping, standing, or backing. In any event, the time came to join the Wagon Train snaking through the hills of Eastern Montana on its way to Billings. An investment in food, supplies, and horse trailer rental further added to the growing tally. All was loaded and hauled into the country where the Wagon Train camped for the night.

Vernon hitched Donna-Far-Go to the buggy containing all his camping supplies and led her to the gate in the fence where the entire train previously passed through that morning as it made its way down the valley. The Walker decided she didn’t want to go through and reared up in the harness taking Vernon’s arm with her, giving him a mighty jerk. He fell face-forward and landed directly under the dancing hooves of the spooked horse. Slightly trampled and a shoulder aching, he pulled himself up and regained control of the animal.

Now, with one arm barely functional, determination drove him not to miss his chance of a lifetime. Putting the pain aside, he got his rig through the gate and onto the trail. As the train slowly made its way across the far side of the valley, a small black buggy pulled by a horse that neither knew how to walk slow, stop or back up, could be seen making rapid circles around and around at the tail end of the train. For the next four days, Vernon and his buggy traveled ten times the miles of the wagon train as he labored with his one good arm to rein in his over-enthusiastic steed.

After lost ropes, several repairs to a broken harness, rain, mud, cold, and a cook stove that wouldn’t heat the beef stew, Vernon pulled in west of Billings with the rest of the train, tired and sore, but gratified that he made the trip and fulfilled his dream.

The next day the Wagon Train joined the Western Day Parade through downtown, Vernon and his buggy once again taking up the rear. With a bandaged arm and a helping of pain pills, he worked to control his fine Tennessee Walker. The weary traveler tallied the cost of his adventure as the crowd cheered the end of the parade. All told, he figured the exploit cost over ten thousand dollars, not including the inevitable doctor bills yet to come.

“Hey, Bettie, there’s a Centennial Cattle Drive coming up,” Vernon said as he folded over the newspaper.

Hmm, I could use a new kitchen, she thought. 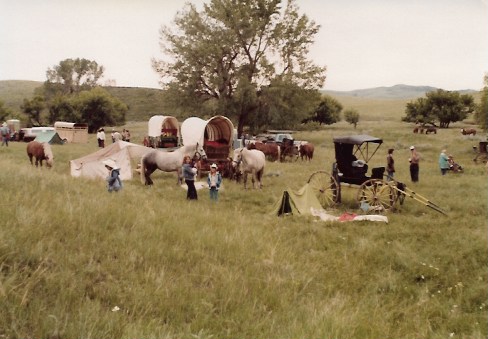