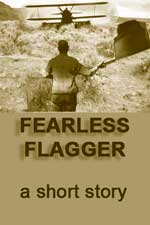 The growling of a lone aircraft echoed up the sprawling mountain draw before it popped into view, cresting a sagebrush-covered hill. Plumes of mist unfurled beneath its wings leaving behind horizontal whirlwinds. Rainbows danced off the droplets of herbicide being dispersed by the gallon in the morning sun. The ag-plane banked left to adjust its course and charged down the hill toward the silhouette of a teenage boy waving a two-foot square, red flag at the end of a short pole. He stood his ground as the plane, just three feet above the plants, snarled toward him. At what seemed like the very last moment, the aircraft lurched upward, missing the boy, leaving behind a rain of chemical that settled lazily to earth.

As the winged tractor made a hard climbing left turn, the youth lowered his flag and took off along the fence line, counting his rapid strides as he went. One… two… three… He knew he had to be at twenty before the pilot completed his final 180˚ turn to the right to come swooping down again. Nineteen… twenty. Just in time, he swung around and waved his flag as the airplane roared only feet above his head, then dropped down to dispense its sagebrush killing cloud of herbicide on a new row of unsuspecting plants.

The boy watched as the plane grew smaller, dragging a misty tail behind. As it reached the top of the hill, wings glinted in the daylight indicating a slight bank to the right. A course adjustment seemed unusual, but there remained no time to think about that. One… two… three… His long slender legs carried him the next twenty paces marking the end of the upcoming swath the ag-plane would travel.

Several minutes passed before the sprayer’s return, time to sit and enjoy the splendor of the mountains hiding in a blue haze off to the west. A meadowlark’s song drifted over the yellow grass. A slight breeze carried a fresh mountain aroma that, for a moment, washed away the smell of 2-4D and diesel fuel still lingering in the air. Off in the distance, the low rumble of the ag-plane echoed through the hills.

Why kill the sagebrush, the boy wondered. The stony ground was obviously not fit for farming. If there were any cattle around, little evidence existed. It didn’t make sense to the youth, but it didn’t matter, he enjoyed being in the country, working for an aerial applicator. To his thinking, agricultural pilots were the quintessential fliers. He hoped to attain that status one day.

In the meantime, getting doused daily with chemicals and having his worn denims and beat-up jeans jacket smell to high heaven, became a badge of honor for a flagger. Living out of a small camper with no running water for bathing and nowhere to do laundry made for interesting times when the crew showed up for dinner at small-town cafes. Often their seating section would clear out as other patrons moved as far away from the agricultural aroma as possible. The teenager felt he had the greatest summer job in the world.

The boy rose to his feet as the growl of the ag-plane grew louder. A moment later it came into view as it skimmed over the top of the hill. As soon as the pilot caught sight of the red flag, he adjusted his course to the left and barreled down the hill toward it. The odd deviation once again caught the youth’s attention. Something appeared wrong. Someone must be out of place.

Two local men had been hired to help with the flagging that morning because of the hilly terrain. On a flat field, there would be one flagger. Here a flagger took a position at each end with a third flagger in the middle because the pilot couldn’t see from one end of the spray field to the other. In this case, the field ends were several miles apart. The two newly hired inexperienced flaggers had been given specific instructions. It became obvious to the boy that one had not followed the plan.

After the plane zoomed over the youth’s head, a portable radio clipped to his belt crackled to life with the angry voice of the pilot, “What the hell are you doing? How many paces are you taking.”

The young flagger unclipped the radio, held it to his cheek, and pressed the send button. “I’m taking twenty.”

“Two! What are you, an idiot?” The roar of the engine in the background accentuated the pilot’s anger as he circled overhead.

“Two! Two! You’ve got to be kidding! Do you have any idea how much your screw up is costing me?” The enraged voice on the radio screamed.

In total frustration at being misunderstood, the boy pushed hard on the transmit button, “No, Bill, twenty. I’m taking twenty paces.”

No use. The static on the radio prevented a clear transmission and the boy’s plea went unanswered. He raced his twenty paces to his next location. The aircraft roared low over his head, releasing its nasty herbicide early so it rained down on the boy. He knew it was on purpose, although he had been drenched many times before. That came with the territory.

As the plane disappeared over the hill, the stunned flagger plodded on to his next post. Confused about how the pilot could believe he would get things so wrong, particularly after all this time, he sat down to think. Each stride took approximately three feet. Twenty paces equaled sixty feet. Certain sixty feet defined the swath width, he knew he couldn’t have made a mistake.

A cloud of spray created a halo around the airplane as it appeared once again over the hilltop. The boy took up his position and slowly waved his red flag back and forth. The plane grew larger as it came straight at him, gobbling up the air space between them. He remembered how he used to duck when the plane soared overhead, although it always cleared him by ten to twenty feet. He got used to the rush and now stood erect. The plane kept coming head-on. He waved his flag. With clouds of spray trailing behind, the aircraft bore down on the youth. The seconds rushed by but the airplane didn’t zoom up at the last moment. Instead, it charged directly at the boy. When he realized the airplane wasn’t going to pull up there wasn’t time to duck, so he simply fell over backward as the wheels of the crop sprayer raced menacingly close overhead. Had he remained standing he was sure he would have most certainly been hit. The teenager lay flat on his back, heart-thumping over the near-collision.

The crop sprayer continued south and disappeared over the hills to pick up another load of chemical, leaving a startled youth lying in the dust on his back. Picking himself up, he brushed off the dirt, and stared into the distance toward the vanishing sprayer, shaking his head in disbelief. No doubt the pilot was mad and trying to scare him, but a tragedy was barely avoided.

Turnaround for reloading the airplane usually took about twenty minutes—enough time to eat the sandwich the boy brought with him, and to relax. He found a large flat rock to stretch out on and soak in some of the morning sun. Morning chill remained in the air and the warm sun felt good. He had no way of communicating with the pilot or the other flaggers. The radio only worked line-of-sight when the airplane flew in the air above him. He had no alternative but to wait and keep his position for when the pilot returned.

Twenty minutes passed with no sign of the airplane. Another twenty minutes went by without the familiar sound of an approaching aircraft. Minutes turned into two hours before he spotted the old, beat up, white company pickup across a gully with someone waving at him, gesturing for him to come. He quickly made a small pyramid of stones to mark his spot, grabbed his brown rucksack, and headed for the truck. The loader, a Hispanic fella who fueled the aircraft and loaded the hopper with chemicals, greeted him.

“I already got the other two guys and took ‘em back to base,” Jose said.

“What happened?” the boy asked. “Bill didn’t come back.”

“Dios mio, he was mad when he landed. He was cursing up a mean streak, tossing things around. He grabbed the fuel hose from me and told me to back off. Said he’d do it himself. I don’t think I’ve ever seen him so mad.”

“Did he say I screwed up?” the boy asked as he climbed into the cracked and worn passenger seat.

“Si. He was especially mad at you. Said you were costing him a bundle. Said it served him right for hiring a bambino.”

“Am I in big trouble?” The boy shrunk into the seat.

“Naw. Senior Bill is the one in big trouble.”

The dingy pickup bounced over the rocky slopes, down through a small valley, and up to the hilltop were base camp had been established. Selected because of the long flat ridge, the hilltop had enough area to land the airplane. Bill ran the pickup up and down the ridge several times to make a runway path. The tank truck and camper were parked by the few spindly pine trees at one end.

As they approached the top of the hill, the boy could see Bill and the other two flaggers sitting in lawn chairs next to the camper. The tank truck sat parked but the airplane was missing.

“Where’s the airplane?” the boy asked his companion.

“Over there.” The driver pointed halfway down the ridge.

There sat the airplane, one wing dragging on the ground and the other pointing toward the sky, looking like a crippled duck with a broken leg.

“You remember the red gas can we put on that big boulder in the middle of the runway? The one that Senior Bill would veer around on his takeoff run.”

“Didn’t veer around. He got so mad he forgot all about it. When he hit that thing it sent him ten feet in the air and he came down—splat.”

“Man, he’s gonna tear my head off, but it wasn’t my fault. I was doin’ right. He told me twenty paces and that’s what I took.”

The pickup pulled up to the camper and the boy cautiously approached pilot Bill.

“Hey, kid. Sorry, it took so long to pick you up.” Bill greeted the boy as if nothing had happened.

The boy held out both hands in explanation, “I tried to tell you I was taking twenty paces, but the radio squelch was too noisy.”