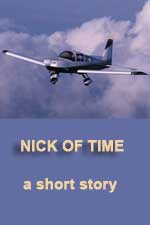 Rick, my student, held a relaxed grip on the controls and a finger on the sectional chart, as he checked our position. I watched the semi-arid valley floor spotted with sagebrush pass under my wing. Small settlements lay scattered over the dry landscape trying to force a reluctant desert to bloom, obviously with little success. The drab flatness soon gave way to rapidly rising terrain where small bushes seemed to grow taller and turn into scrub pine trees. Trees thickened with altitude and bunched into the rugged contours of the mountains. Once sufficiently high enough to escape the dry desert below, they gathered into forests to crown the peaks with dark green.

The American 1A trainer climbed slowly in the heat. “Let’s stay a thousand feet above the ground,” I instructed as we headed for a mountain pass that would take us to the eastern slope. Leaving the flat lands behind, anxious minutes slowly passed knowing a glide back to either side of the mountain range was not possible.

“Yeah, there’s no place to land up here,” Rick said, studying the ragged tree covered draws and crags that extended in all directions. His hand tightened on the control wheel, his knuckles showing a faint white tint.

Not fond of the trainer, I often said it flew like an ironing board with a manhole cover tied to it. The bubble topped cockpit sat over a pair of stubby little wings. We couldn’t hide from the blazing sun, and the air vents with a weak stream of hot Arizona air, offered little relief. At least it was slightly cooler at altitude. The plane had what I called, “training flaps.” I was never quite sure why they were added as part of the design. They did little to slow the airplane on landing or add lift.

Without warning, violent shaking engulfed the whole aircraft. The instrument panel blurred. The convulsing engine felt like it was going to rip itself right out of the cowling.

My emergency training took over before I could think. By the time I got to the fuel gauges, my brain caught up with my instinct. Broken prop! I flashed back to a couple of hours earlier at the Sedona airport when, during preflight, I found a fairly deep nick in the propeller. I asked the mechanic to dress it out. He came with a course round file and filed it down, leaving some pronounced marks. When I suggested that the marks should be burnished smooth, he said, “Aw, it will be fine. I have done dozens of these.”

Obviously, not “fine,” because now about twelve inches of the prop had departed and the unbalanced propeller was about to disassemble the airplane, mid-air. My automatic reflex to pull back the throttle slowed the prop and kept the engine in place, but we were now a glider—a very poor glider.

Rick sat frozen, one hand on the center console and the other with a crumpled sectional chart clenched tightly in his fist. “Are we going down?” he mouthed the words over the unexpected silence.

“Yep.” I tried to answer calmly. “Look for a place to land.”

“Yeah—right.” Rick’s eyes bounced over the crags and crannies below.

We were still on the FSS frequency, so I keyed the mic. “Mayday, mayday, November niner six five eight Lima, engine failure.”  I said engine failure because it seemed a whole lot shorter than to explain a prop separation.

FSS came back almost immediately, “Five eight Lima, we have your position approximately forty miles north west on a heading of zero-three-zero, please confirm.” Thank goodness for that DF test. DF could tell which radial we were on, and the timed transmission along with reported airspeed gave FSS a pretty good idea where we were.
From the moment of the bang, I had been scanning the ground for a place to land. What I saw was timber covered mountainsides and deep gorges. Nothing resembling a flat open area to land an airplane lay below.

“Stay calm and fly the airplane,” the FSS station said. “There are plenty of roads out there. Pick out a good one and set her down.”

Plenty of roads? Where did he think we were? We passed all the roads when we left the flats!

The little trainer lost altitude fast, with nothing but steep mountains and tall trees below.

“There’s a logging trail—I see a logging trail snaking between the timber along the mountain slope over there,” I pointed while speaking into the mic and to Rick at the same time.

I didn’t want to let on that the only option we had was to line up with the trail, sink into the gap, let the trees take off the wings and hope the fuselage stayed on the track between the tall timbers. With trees growing larger and beginning to dominate the windshield, Rick sat silently watching in disbelief.

I set up my approach, lined up with the trail and bled off airspeed, trying to hold the little trainer in the air as long a possible.  Don’t stall this puppy. Keep her straight. Easy does it.

We sank rapidly toward the treetops and the slender ribbon of dirt road darting in and out of the shadows.  As the tangle of green fingers reached up to snare us, a small clearing appeared the other side of the trees and to the left. The tiny meadow had a significant slope to it, but a better choice than going into the forest. I pulled on full flaps to convert the last of our airspeed into added lift. The subtle boost was enough to make it over the tops of the spires with only inches to spare.

Once clear of the green giants, I crammed down on the left rudder, turned the control wheel hard right and pushed forward, for a steep slip, down into the clearing.
“Hold on, this could get rough!” I blurted out.

Rick had hardly moved until that point, but shot his hands forward and braced against the instrument panel.

A quick flair at the last second put us on the ground hard, heading down hill toward the stand of trees that ringed the meadow. The plane hit a small mogul and catapulted back into the air, coming down a second time with a thud. I thrust down again on the left rudder and brake, making a bouncing arc with trees flashing by our wingtip. The plane shuddered and shook as it stumbled over the tall grass and wild flowers. We slid to stop just feet from disaster; the fiberglass gear legs had held up to the beating.

In the next moment all was strangely quiet. I rolled back the canopy and heard birds chirping, the wind gently blowing through the pines. I inhaled a large breath of clean mountain air. The calm was surreal.

I don’t know how long we sat there in disbelief of our good fortune. Time had lost its meaning. We relished the peacefulness of the mountain scene, and then Rick and I looked at each other and broke out in uncontrollable laughter.

The adrenaline drained from my brain and I keyed the mic, “Flight service, five eight Lima is on the ground safely.”

The next few minutes filled with conversations with the Flight Service Station making sure that we were okay and not in shock with serious injuries.

“Are you sure you are all right?” the agent asked. “Look around. Is there any blood? Do you feel any pain? Check each other out. Are you out of the plane? Can you smell gas?”

It took some doing to convince them we were fine. In fact, we were sitting on the wing enjoying the peace and quiet.

A Bonanza pilot heard our mayday call and flew overhead. He radioed back to Flight Service and informed them he had found us. Then, he called down to us over the radio, “How the heck did you ever get that plane into that tiny space?”

“Just lucky I guess,” I answered casually, as though it were all in a days work.

Later, we were picked up by a forest service Bell 47 helicopter. As we lifted off, we looked down at a postage stamp size meadow with a small white airplane at its edge in the vast timber forest. Wheel tracks in the deep grass made a sweeping turn around the perimeter in an almost complete half circle, without touching a tree.
During the whole episode, Rick said he wasn’t scared until just before touchdown when I barked, “Hold on, this could get rough.”

Who had time to be scared?