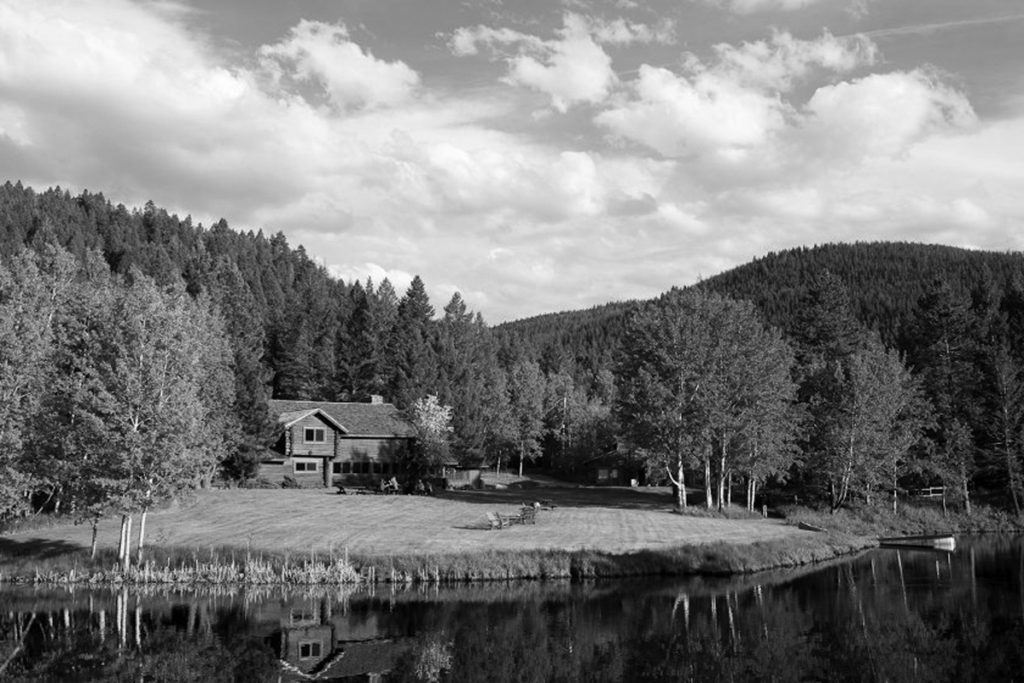 Multifarious music from all corners of the mountain lodge banquet hall melded together in happy disharmony. Groups strummed guitars, beat out rhythms on bongos, plucked on sitars, and shook tambourines. An eclectic mix of young people populated the event. Long-haired hippies in fringed leather vests sat in groups, singing pop songs with clean-shaven social climbers and Hindu devotees in Nehru jackets. The party, attended by musicians and their friends, had become a monthly event at the Feathered Pipe Ranch.

“I have a really sweet lady I want you to meet. Come with me.” Vijaya [Ve..jay..yah] grabbed my hand and pulled me off one of the few chairs in the room, leaving my guitar behind. “Trust me. You’re gonna like her. It’s your karma.” She weaved her way through the crowd of party-goers toward the large two-story stone fireplace at the far end of the lodge.

I had only one option, to follow. The determined lady had embarked on her mission and held a tight grip on my hand.

Vijaya and her sister, whose name was India, came to own this unique ranch in the mountains of Montana through rather bizarre circumstances; one that began a half a world away. Asia attracted a lot of young people seeking enlightenment through drugs and spiritualism in the sixties. When the Beatles made their trek to the land of Transcendental Meditation, globe-trotting became even more alluring. The sisters got caught up in the migration and spent several years in South Asia. Call it karma or call it chance, their adventure brought them to own this serene estate among the Montana pines.

Through their travels, they took Hindu names. Assuming the name of a country seemed a bit odd, but it fit the lady who adopted India’s culture. India and Vijaya had made the journey and found their holy guru, who now defined their lifestyle.

As a captive in tow, I had become friends with the sisters, particularly Vijaya. Now she seemed determined to be a matchmaker.

“Who is she?” I shouted over the party noise.

“The one I told you about. She’s a sweet lady. You’ll see.” Vijaya slipped between two guys deep in discussion, her reluctant companion trailing behind. Not amused, the fellows quickly closed the gap and returned to their conversation.

A group surrounding the fireplace sat on the floor singing and playing their instruments. A young woman with long wavy golden hair sat perched on the stone hearth outside the circle of musicians, strumming her guitar. She concentrated on mimicking the finger positions of one of the guitar players and didn’t notice Vijaya emerging from the festivities with a bearded gentleman.

“This is the Montana gent I told you about,” Vijaya said. “You two need to get to know each other.” She pushed her prize in front of the girl with the guitar. I stumbled slightly over my feet but quickly regained my composure.

“Larry, this is Shakti.”
Gosh, she’s gorgeous! I thought, as this beautiful girl with long sun-bleached hair, olive tan skin, and a sweet smile, looked up.

“Hi. Uh … Vijaya said … uh … can I join you?” I glanced over my shoulder to see Vijaya stepping back into the crowd with a smile on her face as she winked at the girl. Shakti flashed back an embarrassed glance and then looked up again.

“Sure. Sit down.”
I sat down on the floor in front of her. She was enchanting in her psychedelic skirt, bare feet and flowers in her hair. What was Vijaya thinking? This would be an odd match—the conservative Montana gent and the flower child.

“Do you play?” the girl asked, strumming her guitar.

“We call ourselves Mountain Thyme. You know, like the herb. It’s a play on words.”

“Oh. That’s cool.” She ran her fingers over the strings, stopped and offered her guitar. “Here. Play something.”

She pulled the instrument back to her lap and concentrated on forming a C7. “Do you sing too?”

“Not really. Turns out it’s not my thing. I tried singing with the band, but then they decided I should do a solo act, while they went on break.”

Shakti chuckled. “You mean they didn’t want you singing with them?”

“Nah. My singing career sort of ended there. I can’t remember the words to songs anyway. Now I just play rhythm guitar and manage the group.”

She gave up on the chord and laid the guitar against the hearth. “I only know a few chords. I was just trying to keep up.”

I had barely noticed the fireplace group singing Mr. Tambourine Man in the background.

We sat and listened for a minute. “I like Bob Dylan,” I said to fill the awkward pause.

The group sang on.

“So, how do you know Vijaya and India?” I crossed my outstretched legs, leaned back on my elbows and gazed up at her.

“Really? You’ve been to India?

“Yeah. I’ve been there several times. They were at the ashram where I stayed.”

“Then you must know how Vijaya and India got this ranch.”

“Sure. They took care of a lady at the ashram. I think she had cancer. She turned out to be an heiress and left the ranch to them in her will when she died.”

I had heard parts of the story from Vijaya. The ranch came as a totally unexpected gift for the two hippies seeking wisdom at the feet of an Indian guru. They arrived in Montana a few years later to see what they inherited. Thinking they would find a small cabin in the woods, they discovered an estate on three hundred acres of prime forestland by their own pristine lake.

“Can you believe this lodge? You’d expect Teddy Roosevelt to come riding up. I mean, this place, the grounds, the carriage house, guest houses … it’s like the movie set of Bonanza, but even better.”

“I know. And I love the lake and all the wildflowers”.

I shifted on the hardwood floor, trying to find a more comfortable position. “India told me they didn’t have any money when they got here and were pretty overwhelmed. Can you imagine showing up to find this?”

“I think at first they decided to sell it. After all, they didn’t know what to do with a ranch. But India said the place spoke to them. It had an aura too beautiful to part with.”

“It is beautiful,” Shakti said as she gazed across the room at the bentwood staircase leading up to the second-floor balcony. “I’m glad they kept it.”

“No kidding. This is a great place. Did you know this whole lodge was filled with valuable antique furniture when they got it?” I waved my arm to encompass the room, which now contained little furniture, other than mats on the floor.

“Yeah. The only way they could keep it was to sell off the antiques and pay the back taxes.” Feeling slightly embarrassed, I quickly shifted back to Shakti. “Hey, you probably know all that stuff.”

“I didn’t know about the antiques. Too bad they had to sell them.” Shakti swung her legs off the hearth and onto the floor. A dozen bracelets on her wrists and ankles jingled melodically as she moved.

“The locals are pretty suspicious about what’s going on around here,” I said as I looked over the room at the mixture of musicians, hippies, and young people. “Most of the neighbors are conservative and a bit uptight. Yoga retreats really aren’t their thing.”

When I turned back, I was greeted by her dancing green eyes. Feeling I lingered too long, I switched my gaze toward the circle of singers.

“So, what brought you to the Feathered Pipe Ranch?”

“Vijaya invited me to come and help out for the summer. I’ve been wanting to do some traveling on the mainland, so I visited a relative in North Dakota first and then came here.”

“Hawaii? You’re from Hawaii? Cool.” Cool? C’mon, you can say something more intelligent. “Wow, Hawaii. That explains the tan.” Yeah, right. That’s more creative? How do you talk to a girl from Hawaii?

“I’ve lived there since I was two.”

This is getting interesting. She’s a naturally beautiful flower child and it’s not a put on.

The group launched into House of the Rising Sun.

“So, what’s your story?” she asked as she flicked back her strawberry blonde locks and gave a look suggesting she didn’t know what to make of this tall, blue-eyed Montana gent.

“No, no. I do flight instructing, some charter flying, and I’ve even done some crop dusting. All small airplane stuff.”

Shakti shifted towards me with curiosity. I glanced at her for a second and then back to my feet. I knew if I looked in her direction much longer things would become uncomfortable. Her beautiful young face mesmerized me.

“So is that what you do here?”

“Sort of. I came several years ago to attend aircraft mechanics school. There’s one of the better technical colleges here. I wanted to learn about the mechanical workings of the airplanes I flew, so I took a couple of years off to attend. I hope to eventually get a good corporate job flying copilot mechanic or something.”

I always light up when talking flying. I assume everyone else will be interested in aviation as well. “After I graduated, I did more instructing and charter work in Wyoming. I even did some crop dusting down there. I’m not crazy about the cold, so I ended up in Flagstaff, Arizona flight instructing. I figured Arizona would be warm, but I never saw so much snow in all my life.”

Shakti appeared interested but I knew I was describing a world she knew nothing about.