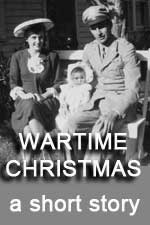 The flight of lumbering B-24 Bombers growled their way through the cold night air, moonlight reflecting off their silver wings, as they broke formation. One by one, they lined up on the distant runway lights, pilots concentrating on attitude, speed, and altitude with the intent of making a perfect night landing. This was the final flight for Lt. Drake and his crew, ending several months of intense training in the big four-engine bird.

Pueblo, Colorado had served as a temporary home for him and his young family while he prepared for war. Orders had been received for Topeka, Kansas where he would find out what fate had in store for him. But, tonight, he had other worries on his mind.

He had asked to see his commanding officer the day before. “Sir, I would like an emergency leave. My one-year-old daughter is very sick, and I need to take her and my wife home to Montana before we are shipped out.”

Lt. Drake’s daughter had the measles, and he wanted to make sure his family was taken care of before he departed for destinations unknown. “We can leave first thing the morning after my last flight, and drive to Billings. Once there, I can catch the train and be in Topeka by the 27th.”

The Commander had been sympathetic and granted a Leave of Absence with the understanding that he would be in Topeka on time.

The morning was still dark when twenty-two year old, Lt. Drake loaded his wife and ailing daughter into their old ’36 Chevy coupe. Billings, Montana was six hundred miles away. The trip would be long.

As they passed through Denver before the city awoke, light falling snow sparkled in the headlights. Dawn broke with a heavy overcast as Cheyenne came into view.

Little Lana was bundled in her mother’s arms, exhausted from her fever, and quiet. That was somewhat of a blessing since her crying had made sleep the night before almost impossible.

Snow became heavier as they traveled, and soon the road was white and slick. The further north they pushed, the worse it became until they were the only car on the narrow two-lane Wyoming highway. Wind whipped white barricades across their path and reduced forward visibility to a few yards.

“Hold on, Betsy,” Lt. Drake called out to his wife, Bettie, as he struggled to regain control of the car that had lost traction on the slippery road.

The vehicle headed for the barrow pit and plowed into a snow bank in slow motion sending the white powdery stuff flying in all directions. Luckily, there was no damage, but it took a trucker with a long chain to pull the car out and get them on the road again. With little alternative, they forged ahead into the blizzard. Several more times the car lost traction and ended up off the road. Each time a helpful trucker pulled them out.

“Follow me and stay in my tracks,” a grizzled face trucker said, taking pity on the serviceman and his tired family. “I’ll get you there.”

The big semi plowed through the winter weather all the way to Billings with a Chevy coup close in trail.

After sixteen hours of fighting the worst snowstorm of the season, the overly fatigued couple pulled into the driveway of the little white farmhouse on Washington Street. It was nine o’clock, Christmas Eve. The baby’s fever had broken and she was feeling better. Grandparents took over her care while the weary travelers got a well-deserved night’s sleep.

Christmas Day was spent with parents, grandparents, family, and friends. Everyone was aware that Lt. Drake would soon be heading off to war, so the mood was heavy with mixed emotions. The following day amidst tearful goodbyes, he was on a train for Topeka, Kansas.

Crossing the Midwest by rail was a slow process but far better than battling icy roads. After a full day and night, the weary airman arrived in Topeka at 4:00 in the morning on the 27th, just in time to make reveille. An exhausted Lt. Drake fell out in formation with his fellow crewmembers at 5:00 a.m. to the announcement that all had been granted a ten-day leave.

Youth has its benefits, and one is stamina. The young Lieutenant repacked his suitcase and boarded the next train west, this time making a brief stop in Minneapolis to visit a brother and other family members.

Finally arriving back in Billings, he spent the evening again with Bettie and baby Lana, looking forward to a relaxing week before his assignment. The next morning, a knock came at the door.

“It’s a telegram for you,” Bettie called to her husband, who was bouncing little Lana on his knee. “From the war department.”

Lt. Drake’s face dropped when he read the contents. “All leaves canceled. Return to base for overseas assignment.”

After another round of tearful goodbyes from family and friends, Lt. Drake once again boarded the train to Topeka, Kansas. This time he didn’t know if or when he might return. War took him halfway around the world. The farm boy from Montana found himself traveling through far off places he had barely heard of; Puerto Rico—Natal, Brazil—Dakar, Africa—Casablanca—Cairo—Karachi—Calcutta, and finally to a base in Pandaveswar, India, where he flew thirty-three missions against the Japanese in Burma, and hauled gasoline and supplies into China.

On September 2nd, 1945 the Japanese signed an Instrument of Surrender aboard the USS Missouri in Tokyo Bay ending World War II. In November, Lt. Drake flew a B-24 back to the United States and was reunited with Bettie and Lana in time to celebrate a real Christmas together.