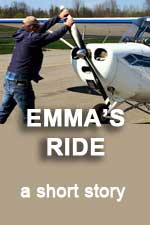 The smile on Emma’s face didn’t hide her nervousness. She had bravely climbed into the back seat of my Aeronca Champ, a small tube and fabric, two-place airplane born in the mid-1940s. After first meeting this lovely girl earlier in the week, I had convinced her that she needed to see the countryside from a thousand feet in the air.

“I’ve never been up in an airplane before,” she protested. “Let alone a little one.”

The last thing I wanted to do was scare my newly acquired friend. It had been a while since my last romance. Female companionship was hard to come by in this small Wyoming town. There weren’t a lot of young single ladies available. I felt very fortunate because not only was Emma apparently available, she was quite attractive and smart.

“Here, let me fasten your seatbelt.” Standing by the open door, I reached in and dug out the belts from the tight spaces on each side of the seat. Emma swept back her long blond hair as I wrapped the belt around her small waist and clicked it together on her lap. Her fresh smell was intoxicating. My pulse raced a little at being so close.

“I’m nervous,” she said with a girlish giggle.

“Don’t be, this will be fun,” I answered in my most assuring and professional voice. “I do this every day.”

The fact that I was the new guy in town, a daring crop duster, charter pilot, and flight instructor, helped make the initial desired impression. Now, I needed to reinforce that with confidence and gentle manners. What better than a smooth, uneventful airplane ride on a beautiful summer morning?

Most small airplanes from the forties don’t have electric starters, and my Champ was no exception. That meant someone had to flip the propeller to get the engine started. After a thorough scan of the empty flight line with no one around, that someone would have to be me.

“See these small pedals down by your feet? Not the large ones that look like a tee, but the ones to each side.” I followed her shapely legs down and pointed out the rectangular pads protruding from the floorboard. “Those are the brakes. I’m going to need you to push on them while I start the engine.”

Emma’s eyes grew large as she softly grabbed my shoulder. “You want me to do what?”

“It’s no big deal. I just need you to hold the brakes while I start the engine,” I said in a calm, reassuring voice. “It’ll be fine.”

Emma’s smile flattened and her forehead wrinkled. “Well, okay. If you say so.”

I could tell she wasn’t fully convinced, but I had evidently made a good enough impression that she trusted me.

With the ignition turned off, mixture lever pulled back, and throttle closed, I pumped some fuel into the carburetor with the primer. “I’m going around to the front of the airplane to pull the propeller through a few times. The engine won’t start. I’m just getting it ready, but I still want you to hold the brakes.”

The fact that Emma had never been in an airplane before no doubt worked in my favor because she was probably unaware that most airplanes have electric starters. She seemed to accept this procedure as normal, although the strain in her face expressed an uncertainty about her decision to put her life in the hands of this young, daring pilot.

“Push the brakes, now,” I called from my position at the front of the plane. With a firm grasp on the propeller, I pushed and pulled to rock the airplane, making sure the brakes were locked. “Good.”

Rotating the propeller through four or five complete revolutions drew fuel from the carburetor into the cylinders; ready to ignite when the switch was turned on.

“You can relax for a minute,” I said, as I swung in under the overhead wing strut and reached into the front cockpit. I pushed in the mixture control, cracked the throttle open a half inch, and turned the ignition switch to both mags.

Softly touching Emma’s arm, I said, “You’re doing great. We’ll do the same thing, only this time the engine will start.”

I took up my position at the nose of the craft. “Brakes locked?”

With a push and pull on the prop to make sure, I grabbed one blade and swung it down hard while backing away.

The propeller rotated to a stop without the satisfying pop pop of fuel being ignited.

“Once more,” I called to Emma. I could see the strain on Emma’s face as she forced down on the brake pedals. She was taking her task seriously.

I stepped forward and pulled down hard.

This wasn’t how it was supposed to happen; the engine always started on the first or second try.

“Okay, hang on.” I ducked under the wing and reached into the front cockpit once again. “Ignition, off—mixture back—throttle full open.” I looked back at Emma.

“Is it alright?” she asked.

“Oh, yeah,” I said. “Just got to clear its throat. I’ll pull it through a few more times, and then we’ll start over.”

Back to the front, I called for brakes once more, jostled the airplane, and pulled the propeller through a number of revolutions.

Returning to the cockpit, I pulled the throttle back to the half-inch setting, pushed in the mixture knob, and turned on the ignition switch. “She’ll go this time.”

Once again I gave a mighty swing of the propeller.

The morning sun was beginning to heat up, and I was feeling it, as I grew damp under my shirt.

“I think she’s flooded. We’ll have to try and clear it again.”

“Really?” Emma’s voice now had the ring of concern. “We don’t have to do this now. We can go flying some other time.”

“Let’s give it one more try. I know you will really enjoy it once we get going.” I could feel Emma’s confidence slipping away. I had to get her in the air. “We’ll just clear its throat again. That should do it”

I reached forward, pulled back the mixture and pushed the throttle wide open.

Again, at the front of the airplane, I called to Emma, “I’m just gonna pull it through a few more times before we start it. Brakes set?”

I pulled down on the blade.

The propeller instantly jumped from my hands as the engine went to full power. In shock, I stumbled backward to get out of the way. The ignition switch, you idiot, flashed through my mind.

In a panic, Emma screamed as she grabbed for the sides of the cockpit. Her feet slipped off the brake pedals in her frantic attempt to find something solid to anchor to.

The old Champ lurched forward at me, engine roaring. Next stop would be the hangar door across from the tie down area if I didn’t halt the beast. By reflex, I managed to jump to the left, barely clearing the snarling propeller as it passed. I grabbed the wing strut as it crossed over my head and held on tight.

I could see Emma frozen with fright, helpless to do anything, and yelled, “pull the throttle back,” but she was too shocked to move, even if she had known where the throttle was.

Pulling hard on the wing strut while being dragged along, I was able to get the angry airplane to turn and pivot around me. Working my way down the strut, hand over hand, I made it to the cockpit, reached in, and jerked back the throttle just as the engine died. Luckily, I had shut off the mixture so the engine had only the fuel in the carburetor bowl to feed its mad frenzy.

The airplane rolled to a stop with my heaving body hanging half out the door, and the Champ’s stunned passenger pasted hard against her seatback. Any male ego I had, lie quaking at the soles of my feet. We both remained locked in that position, breathing heavily for what felt like minutes.

Finally, I slowly arose. “I think we’d better call it a day,” I said without looking up.

“That’s a good idea,” Emma said as she slowly unbuckled her seat belt.

The ride back to town was a rather quiet one.

I never saw Emma again. I was too embarrassed to call.

Within six months I was off to another job in another state.

I wonder if Emma ever got her airplane ride.