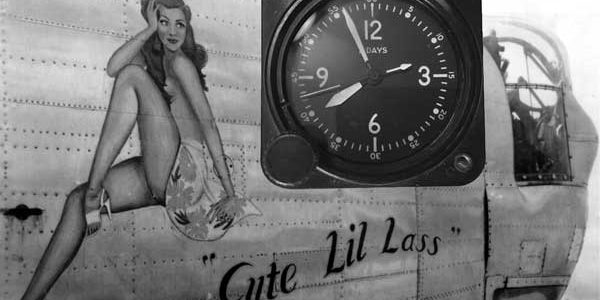 My father flew B-24 bombers and tankers out of India during WWII. As an artist, he also painted nose art on a number of airplanes (see my book, Across The Yellowstone). “Cute Lil Lass” was one of the last paintings he made. This was the B-24 he flew back to the states from India at the end of his tour. He had flown forty-two missions into Burma and China. As a memento, he removed the 8-day clock from the instrument panel and hid it away in his luggage.

The clock now sits on my bookshelf below a model of the B-24 he built when he was in his eighties. Although it ceased to tick years ago, the hands on that clock represent a wonderful reminder of the bravery demonstrated by my parents and their generation. I look at the face of that timepiece and imagine it vibrating next to the other instruments from the drone of those four huge radial engines, as the plane struggled for altitude to cross the Himalaya Mountains. I can see my father sitting at the controls, a young man of twenty-one, in charge of a crew of kids, freezing in their flight suits after sweating in the heat of India prior to takeoff. The stories he and others told of their experiences are awe-inspiring, bone-chilling, and humbling. They left extremely large footprints to follow.

I grew up with that clock and all the other paraphyllia my father saved; log books, flight suits, diaries, cadet books, and picture albums. I don’t know if my love for aviation came from my exposure to those things, or I was attracted to them because of my desire to join the birds in flight. Either way, I can’t express how thankful I am that he left those treasures for me and others to enjoy.

Several years ago, my siblings and I decided to donate much of Lt. Vernon L. Drake’s war memorabilia to the National Museum of WWII Aviation in Colorado Springs, CO. His legacy will live on there for years to come.